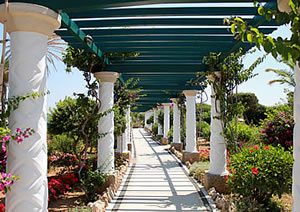 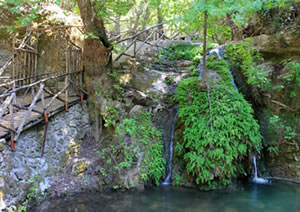 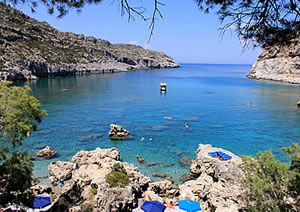 The capital of the Dodecanese and the fourth largest Greek island is definitely one of the most popular tourist destinations in Greece. Rhodes harmoniously combines the medieval with the traditional features, the lacy beaches with pine-covered mountains, mountain villages with seaside settlements, archaeological sites, medieval monuments and cosmopolitan tourist resorts with traditional accommodation, forming an unrivaled destination that can satisfy every expectation.

The medieval city, the capital of the island and a UNESCO World Heritage Site, is built semi-circularly around the main harbor. Rhodes Town is multicultural, with buildings from the Ottoman domination, such as the Suleimanier Mosque and the clock tower, from which you can enjoy a magnificent view of the Old Town. Outside the city walls, you can visit the new part of the city, with the impressive buildings built during the Italian occupation, such as the Post Office and the Prefecture.

On the other side of the city you can visit Rodini, a wonderful park with peacocks, running waters and paths between pines and cypresses. Rodini is known for the Rhode School of Rhodes, where celebrities such as Julius Caesar and Cicero studdied.

In the Archaeological and Byzantine Museum (housed in the building of the Hospital of the Knights and Virgin Mary of Victory, respectively) you can admire important findings and relics that testify to the rich history of the island.

Throughout the island, you can visit traditional villages such as Koskinou, many archaeological sites (Ancient Ialyssos, the Temple of Knights of the Era, etc.), the famous bathing facilities of Kallithea, monasteries, the aquarium, the which is reminiscent of a marine underground cave where Aegean marine species are housed, the Cave of Camela, and of course the famous Butterfly Valley, a nature reserve of rare natural beauty with lush vegetation in which, from June to September, millions of butterflies appear.

Wonderful routes reveal the natural beauty of the island in all its grandeur: hiking from Filerimos through a magnificent pine forest in the valley of the butterflies, from the village of Salakos to the top of Prophet Elias, from the castle of Kritinia to Kretinia Village, through a fertile valley, or the conquest of Attaviros' peak for the most highly trained hikers, are just some of the choices offered by this beautiful island.

Rhodes is an island known for its cosmopolitan life, the sophisticated tourist resorts as well as the wonderful beaches, many of which are ideal for windsurfing because of the "meltemia" (the wind during the Augst and September) that blow in the area.